In order to explore the energy consumption implications of total travel distance, modal shifts and electrification in the transport sector, the ZeroCarbonBritain scenario uses a transport model that starts by looking at how we travel today using available UK Government statistics before then modelling these changes to suggest a future scenario. The work below attempts to replicate and cross check the ZCB transport model in order to inform the 2019 update.

The following UK Government statistics tables make it possible to build an overview of transport energy consumption, km travelled per person and per vehicle and therefore vehicle economy and load factors of each transport mode and are used in the modal summaries below.

* 2016 is the most recent year for which energy and travel distances are available.
* The road transport energy consumption table 2.02 does not allocate biofuels and LPG per vehicle type and so a small adjustment is applied to take this into account, equal to a 3.55% increase on the stated per vehicle energy consumption.
* The per vehicle road transport energy consumption table 2.02 is also given in million tonnes of fuel rather than million tons of oil equivalent. A conversion of 12952 kWh/ton petrol, 12576 kWh/ton diesel and 11630 kWh/ton oil equivalent is used (see calculation in appendix), cross referencing the result with table 2.01 shows much closer correlation.

In addition to the summaries of the current state of transport in the UK, the sections below explore the potential impact of electrification and load factor on each mode. Examples are also given of conventional and electrified vehicles. These separate analyses are then combined at the end into an overall transport model that enables the exploration of changes in total distance travelled and modal shifts in addition to electrification and vehicle efficiency improvements.

Alternatively increasing fleet efficiency to the real world MPG of a Hyundai Ioniq Hybrid of 61.5 MPG-UK could reduce energy consumption by 40% to 181 TWh and per person carbon emissions to 64 gCO2/p.km. A fleet wide economy of 61.5 MPG is perhaps unrealistically high given the wide variety of car and van types in the whole fleet.

Complete electrification to the real world efficiency of the Hyundai Ioniq Electric of 0.154 kWh/v.km (includes charging losses), 0.093 kWh/p.km @ occupancy of 1.65, could reduce energy consumption by 79% to 62 TWh and per person carbon emissions of 26 gCO2/p.km at the UK grid carbon intensity of 283 gCO2/kWh in 2018 or 0 gCO2/p.km with a zero carbon grid.

The fleet average should cover of course a wide variety of car and van types, from small compact cars to large SUVs and vans. It is likely unrealistic to assume that the future electric vehicle fleet achieves the economy of the Hyundai Ioniq Electric which is itself one of the most efficient electric vehicles available today.

In order to get an idea of what a realistic electrified fleet efficiency might look like we also need to look at a range of electric vehicle models and understand their real world efficiency. This brings in another dimension of complexity as the European test procedures both NDEC and the newer WLTP both appear to overstate realistic range, there is an interesting discussion of the difference between NDEC and WLTP here. Based on my own experience of owning a Nissan Leaf and reading comments on EV forums, the US EPA ratings for EV range appear much more realistic.

If half of all cars were high efficiency and a quarter each of the mid and lower efficiencies the fleet average would be 0.183 kWh/v.km including charging losses. Equivalent to a fleet average of 3.9 miles/kWh as displayed on the car odometer.

Assuming that the higher figure is more likely for now:

A mid range economy for the electric motorbike examples below is 0.065 kWh/v.km. Including a 10% charging loss this increases to 0.072 kWh/v.km. At an average occupancy of 1.07 the average economy should be 0.067 kWh/p.km.

A different uk gov statistics table gives the occupancy of local bus services in 2016 for the whole of great britain as 11.3 passengers per vehicle [B1].

A quick search for bus MPG suggests that a lower economy of ~5 MPG (6 kWh/km) is typical with newer hybrid buses achieving 6.1 mpg (5 kWh/km) and a potential of 7.7 mpg (3.9 kWh/km) [B2]. Another paper however suggests that a better economy is achieved today with modern urban cycle diesel buses at 4.13 kWh/km, the paper references multiple studies with a range of diesel bus economies of ~3.5 kWh/km to 4.9 kWh/km [B3].

A vehicle economy of 3.58 kWh/v.km and MPG of 8.4 MPG seems relatively high given many of the city bus type examples but may reflect significant mileage of long range higher efficiency coaches such as Setra ComfortClass pulling the average MPG up?

The Mercedes Benz Citaro has 26-31 seats and space for 60-74 standing (86-105 in total), the Setra ComfortClass S 515 HD has 51 seats. If we assume a 50/50 mix of both bus types, the average seating capacity is ~40 seats increasing to ~80 places with standing passengers. The standing spaces are of course useful for short city journey's in peak rush hour providing significant additional capacity while the seated capacities are more indicative of longer routes & more rural bus services. An average occupancy of 8.5 passengers per vehicle is a load factor of 21% on a 40 seat bus, or 11% at 80 spaces.

Increasing occupancy
The average load factor for buses is low and could in theory be increased substantially without adding additional vehicle miles. The average number of passengers per vehicle in London in 2017/2018 was 20.2, almost twice the national average for local bus services and 2.4x the average for all buses and coaches. 20.2 p/vehicle is a load factor of 50% seated, or 25% including standing. At 3.58 kWh/vehicle.km, 20.2 passengers would reduce the per passenger energy consumption to 0.177 kWh/p.km and per passenger CO2 emissions to 71gCO2/mile or 44gCO2/km.

Electrification
The electric bus examples below have an economy of 0.841-1.34 kWh/km. Demonstrating a similar reduction in energy consumption vs internal combustion to electric cars above. Taking a mid point of 1.09 kWh/v.km:

What might we expect the electric bus fleet average economy to be? It seems that taking the mid point 1.09 kWh/v.km would be a reasonable first step, applying a 10% charging loss would increase this to 1.21 kWh/v.km. If we assume that the average 100% load factor is a combined seating and standing space for 60 people the per person economy would be 0.020 kWh/p.km. This does not take into account how the additional weight of higher loading affects economy and is of course dependent on the actual number of seats & standing spaces in the bus in question.

If the load factor was 100% the energy consumption per person km would be 0.0486 kWh/p.km or 4.86 kWh/p.100km. This compares well with examples given by David MacKay FRS in his book Sustainable Energy Without the Hot Air.

The physics approach to train energy consumption included in the transport model spreadsheet discussed at the bottom suggests that a train travelling at the same speed as a bus or car should have around half the energy consumption. The Eurostar is a high speed train and so isnt the best comparison with slower moving cars and buses.

If you have used Loco2 to book European or UK train tickets you will likely have noticed the carbon saving calculation that compares train travel to air travel. Their calculation is based on the Eurostar emissions factor of 15.02gCO2/p.km [T4], I can replicate this result with either an old grid carbon intensity of ~500gCO2/kWh or a train load factor of ~57% at 2018 emissions levels and a train economy of 0.03 kWh/p.km.

Trains vs buses and cars

The average train passenger energy consumption (0.150 kWh/p.km @ 32.4% load factor) is 64% less than the average for the bus fleet in the UK today (0.416 kWh/p.km @ 11-21% load factor). The UK bus fleet eke out an 8% lower per passenger km energy consumption than the UK car fleet (0.452 kWh/p.km @ 33% load factor). A rough calculation based on the diesel train economy above suggests that electrification may make up two thirds of the difference in the train vs bus comparison. 60% of all rail journeys are by electric traction [T3].

What happens if we electrify each mode completely and compete on a level playing field applying the same load factor of 30% to each mode?

Note: A 10% charging loss is added to the battery electric cars and buses.

2.063 bn aircraft km were flown suggesting an occupancy of 176 people per flight. The average load factor was 85%, suggesting 207 seats per aircraft.

While there are promising developments in short range electric flight such as the proposed Eviation Alice Electric aircraft with 650 miles of range, significant breakthroughs in battery energy density are likely required to make longer distance travel a possibility.

Perhaps a more likely solution is to create synthetic liquid fuels using excess renewable energy which I discuss in more depth here: https://trystanlea.org.uk/aviation_notes. This is unfortunately not a perfect solution, its both energy intensive: over 10x the potential for high occupancy ground transport and requires additional negative emissions technology to offset the warming caused by the non CO2 radiative forcing's requiring still more energy and land.

Things to watch above and in similar calculations elsewhere

Draft transport model that includes much of the figures given above for current passenger km travelled and energy consumption. The model then builds a hypothetical scenario including a mix of modal shifts & technology switch: 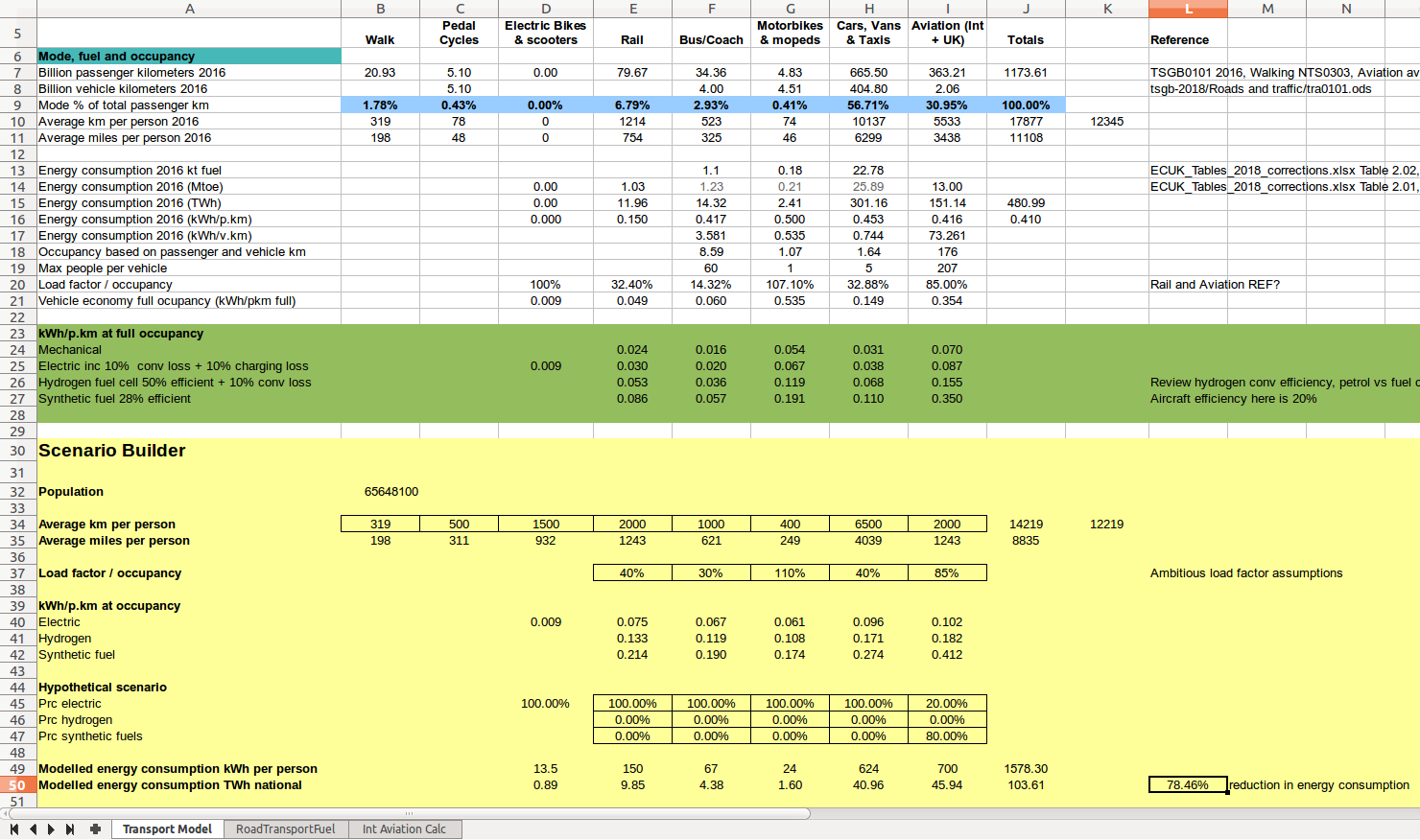