There are several potential options for zero carbon or perhaps lower carbon flight, small short range aircraft may well be electrified directly with battery technology, a company called Harbour Air in Canada are planning a fleet of 100 mile 6 seater electric sea planes, with their first flight scheduled for 2021. Larger longer distance planes are harder to electrify due to current battery energy density limitations, something that could change over time if there is a substantial improvement in performance.

Another approach is to synthesise aviation fuel for conventional aircraft using a renewable or zero carbon feedstock and energy source. This can be achieved via a relatively inefficient conventional biofuel production process or alternatively as explored here: Fischer Tropsch process for synthetic liquid fuel production, it may be possible to either increase the liquid fuel production of a biomass feed source by adding hydrogen created with electricity from excess renewable energy or create liquid fuel from carbon dioxide captured from the air directly, again with renewable energy as the energy source.

It's worth at this point noting that synthetic aviation fuel generated with zero carbon energy may not completely solve the climate change contribution from aviation due to other non carbon forcings. The following graphic from a carbon brief article provides an overview of the other contributions, illustrating the aviation multiplier effect: 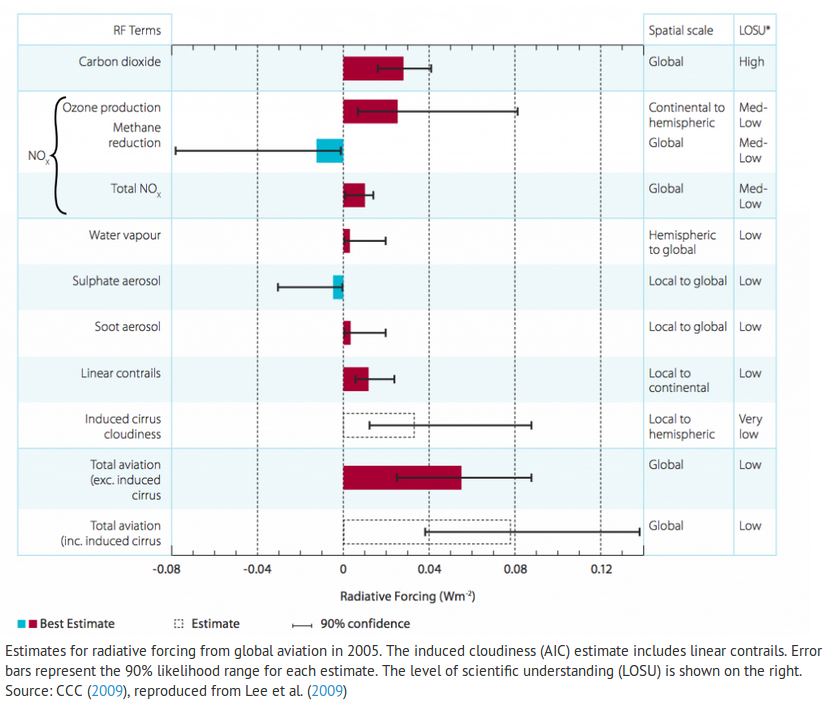 While synthetic aviation fuel where carbon dioxide is captured from the air may reduce the carbon component of the radiative forcing, the remaining contributions may leave two thirds of the impact untouched! I'm vaguely aware from previous reading that there is a lot of complexity and uncertainty to these different radiative forcing's and that the weather conditions, time of day/year can all contribute to a different extent.

Battery electric air-craft would of course solve these other sources of radiative forcing as there is no NOx emissions, contrails or induced cirrus cloudiness. 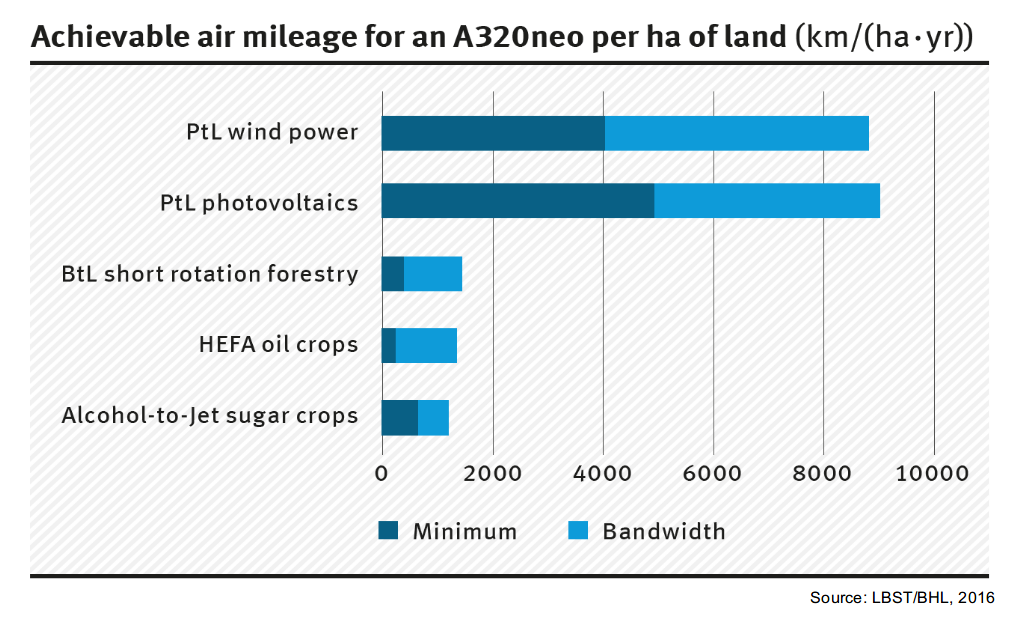 Biomass to Liquid: 515 km/ha
At a biomass to liquid fuel conversion efficiency (without additional hydrogenation) the fuel yield is halved to 28,320 kWh fuel/ha/yr, enough to fly 515 km in a full Boeing 737-800.

If NeoCarbonEnergy achieve 77% efficiency for the conversion of electric to fuel it would be possible to fly 23,205 km/ha/yr, at 52% efficiency this drops to 15,882 km/ha/yr. We might expect this to fall by a half or 2/3rds in a solar farm arrangement with spacing in between rows of panels. Bringing our back of the envelope estimate in range of the graphic above.

2000 km return power to liquid short haul flight: 756 kWh electricity, 0.9 kWp solar, 4.8 m2
Alternatively a short haul flight from Manchester to Geneva return is about 2000 km, this would use 110,000 kWh of fuel or 582 kWh per person. Generated at 77% efficiency would require 756 kWh of electricity, 90% of the output of a 1kW solar PV array. If two people from a household go on holiday the annual output of a 1.8 kWp system would be required, just under half a typical 3.8 kWp domestic PV system. This would however only eliminate the carbon component of the climate change impact of aviation, further negative emissions would be required to offset the other components.

In response to Keith Alexander and Dominic Zapaman on twitter asking the question "How much land would it take to grow biofuel to fly a plane from New York to Hong Kong, vs biomass for BECCS to offset the flight using fossil fuels?"

If we fuel our 2000 km flight above with fossil fuel kerosene 582 kWh per person would emit 151 kg CO2, if we take into account the radiative forcing of NOx and cloud formation of 2.7x this may be increased to 408 kg CO2 equivalent.

Sequestering 408 kg of CO2 AT 6.6 tons/ha requires 618 m2. Alternatively sequestering an amount of CO2 to cover the non CO2 radiative forcing of 151 kg CO2e would require 229 m2. The land area requirement to sequester CO2 is very similar to the land area for the inefficient biomass to liquid process: 205 m2 vs 229 m2 for avoidance of the same quantity of CO2. But then ~2.7x the land area is required to offset the non-C02 emission components.

Using power and biomass to liquid might reduce this fuel component from ~229m2 down to ~80m2. Using solar power to liquid could reach ~5m2. The non CO2 component would still add around ~389 m2 of land required for carbon capture.

Further questions
How would direct air capture compare to biomass based carbon capture in land area terms?
Can carbon be captured from the biomass to liquid process? is that a potential BECCS process itself? examples of BECCS plants in linked report are often corn ethanol production.
Can NOx emissions and cloud formation radiative forcing contributions be reduced significantly?